Pats Peak in New Hampshire New Discounts for 2013.14 and a new lift and more runs

There are exciting improvements in store for the 2013/2014 season with a new triple chairlift to service four new trails and one glade as part of the Cascade Basin expansion, a new area with 100% snow making coverage; (6) additional energy-efficient snow making guns; more rental equipment; and the installation of geothermal heating.

Kris Blomback, General Manager, commented, “We always strive to provide our guests with something new and exciting every season. This season we are excited to showcase our largest expansion project ever with the addition of Cascade Basin.”

New Triple Chairlift
This summer Pats Peak installed a new triple chairlift as part of their Cascade Basin Expansion. This will bring the number of chairlifts to six, giving Pats Peak the largest uphill capacity in the region to assure a great day on the snow.

4 New Trails and 1 Glade
Cascade Basin is a completely new area on the “backside” of the main mountain. For the 2013/2014 season, the new area will consist of four new ski trails as well as one new glade. The trails will have 100% snow making coverage to continue to provide quality snow surfaces. Future options include more terrain, night skiing and additional terrain parks.

To enter into the new area, skiers/riders will take the Backdraft trail, which will lead them to the bottom of the new triple chairlift. Trail names will be picked this summer via a Facebook Contest.

For more information on the Cascade Basin expansion including a blog, maps, timeline and photo journal: http://www.patspeak.com/winter/cascadebasin.html

More Rental Equipment
Pats Peak is home to northern New England’s largest rental shop. Every season the Starting Gate Rental Shop continues to add to its already impressive rental fleet. This season new ski boots, skis and Burton Learn-to-Ride boots and snowboards have been added. The state-of-the-art 9,600 square foot Rental Shop provides fast service to renters along with a carpet lift that takes guests and their equipment up to the slopes.

Installation of Geothermal Heating
Every year Pats Peak takes steps to lessen the ski area’s environmental footprint. This season’s action includes adding geothermal heating to heat the base lodges and paved walkways. Geothermal heating is one of the most energy efficient, environmentally clean, and cost-effective ways to heat.  It generates far fewer greenhouse gas emissions than a conventional system.
Posted by http://mountainsportsclub.blogspot.com/ at 7:00 PM No comments:

Once again Crotched Mountain in Southern New Hampshire will extend 2 for 1 lift ticket discounts for 2013.14 Ski and Snowboard Season for premium Mountain Sports Club members. This discount is valid on midweek non holiday adult full day lift tickets. There is also a lesson, lift ticket and rental offer for the 2013.14 season. 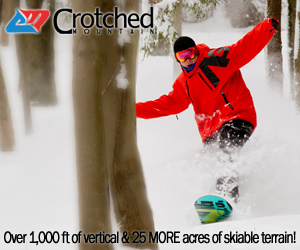 Posted by http://mountainsportsclub.blogspot.com/ at 10:53 AM No comments:

As August brings cooler evenings and monsoon rains to the western Rockies last night brought pictures and reports of initials snows at the high mountain peaks in Colorado. Next will be reports of countdown to snow making and resort openings as we prepare for the 2013.14 ski and snowboard season.

Mountain Sports Club members can look forward to an ever growing array of discounts on lift tickets, lodging travel and shops again this winter. Many offers are now valid.

One of the first new resorts for the 2013.14 season is Owl's Head in Quebec just North of the border. Members will save $10 daily on adult and student lift tickets this winter Sundays through Friday.


Just outside of New York metro area in the Poconos Shawnee Mountain is once again offering Mountain Sports Club members savings all season that include discounts ranging from 2 for 1 lift tickets midweek lift tickets($45 daily value) to a minimum savings of $10 daily on weekends. Premium plus membership that includes a Free Day at Shawnee now available for winter 2013.14.

Posted by http://mountainsportsclub.blogspot.com/ at 7:20 AM No comments: